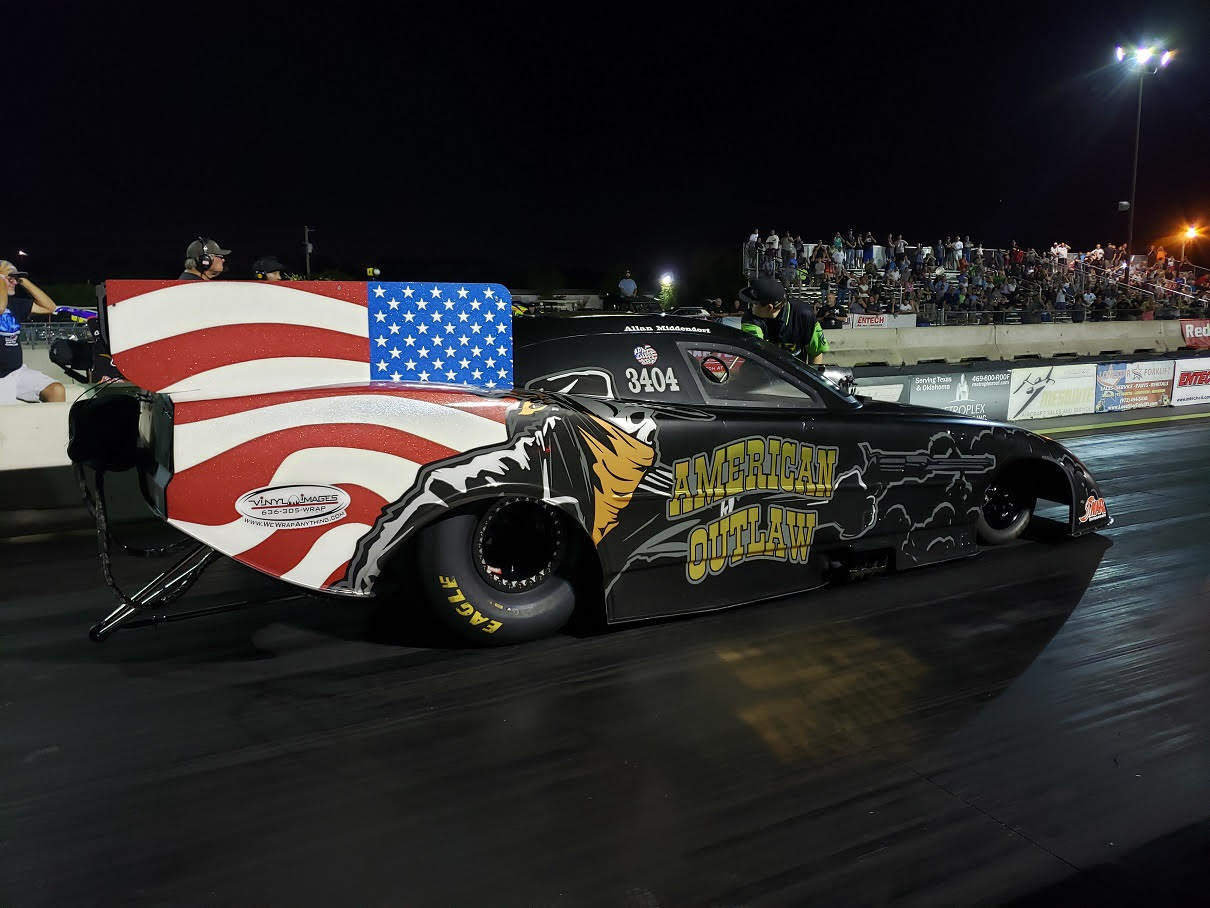 Denton, TX (September 28, 2019) Allan Middendorf walked away from a crash into the catch net and sand trap at North Star Dragway after his parachutes failed to deploy. He was checked out by track medical personal and cleared. He is managing some neck pain, but otherwise alright. This incident happened as Middendorf was locked in a battle for the Funny Car Chaos Championship.

“The car was really hauling down the track. I knew I had the speed record when I clicked it off. Then, I went for the chutes, but didn’t feel them hit, so I got on the brakes and started hopping. I let off and got on them again. I almost went for the chutes again, but I saw the catch net coming up fast and I knew at the last second I wasn’t stopping. So to save the car, I grabbed the wheel and cut it left as hard as I could and thought I would either flip on the roof or go into the net sideways to try and save the chassis. I hit it hard to the side and actually spun almost 360 degrees in sand,” explained Middendorf. “The car is in fairly good shape. The chassis is savable, just bent the front wheels.”

The timing of this accident was a big disappointment for Middendorf, who was having a stellar weekend and battling for the Funny Car Chaos Championship. He came into the weekend No.3 in points with his eye on the No.1 spot. Throughout Friday and Saturday, Middendorf was able to earn a handful of bonus points for resetting the series elapsed time record and series speed record.

“Coming into the weekend, we knew we had to reset records, qualify number one and go to the finals. We were definitely the car to beat. We just put our heads down and worked. We ended up doing everything we set out to accomplish, except going to the final round,” Middendorf said.

With each qualifying pass, Middendorf continued to improve his performance. He made a solid pass during qualifying session one on Friday night, earning an elapsed time of 3.712 at 207.66 mph. During the second session, Middendorf reset the E.T. record and just barely missed resetting the speed record with a run of 3.574 at 222.99 mph.

During the third qualifying session on Saturday he reset that speed record going 3.582 at 227.16 mph before going into net and sand. Unfortunately for Middendorf, the American Outlaw Funny Car was heavily damaged and was unable to make it to compete in eliminations.

In the battle for the Championship, Middendorf ended up finishing in 2nd place.

“We came into this year on a mission: to win races and take home the championship. My crew chief Jake Sanders and I really came a long way this year. We both learned a lot. He’s doing a stellar job and my driving is coming around. I think we’re gonna be a lethal combination and we’re starting to show it. I couldn’t do without Jake, Doni, Jim, Tom, Katie and Nicole – – everybody who has a hand in making this happen and getting it down the track. My sponsors really helped me bring everything together. Thank you to Vinyl Images & Design, Truck Insurance Specialist, Torco Lubricants and Snake Enterprises. It’s been a Cinderella weekend and year.”